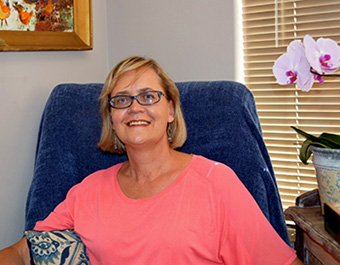 Annatjie Geldenhuys is an Internationally Certified TRE (Tension and Trauma Release Exercise) Provider since 2017. Training in Emmet Technique started at the beginning of 2018 to enhance the muscle and tension release process even more. Certified as an Emmett Technique Provider by mid 2019.

Here is my story.

From early childhood, I realized that I want to help people to improve their lives and have a more positive outlook on life. However, being a very empathetic and deeply emotional person, who needed to mature a bit first, I chose a career where I would work with people on a more superficial basis. I completed a BA in Communications in 1988 with Psychology major. In 1989, I completed diploma in Public Relations, while working full time in Public Relations, and studying part time towards an Honours degree at Unisa. I received an Honours degree at Unisa in 1993. Thereafter I worked in Sales, Marketing and Training for a couple of years. Since 1996, I have been self-employed running various businesses and since 2005, I have been co-owning and managing a Guest Lodge in Magaliesburg. My life has always been about multi-tasking and coping with lots of stress.

I was introduced to TRE® via the ADD Lab in Randburg, as it was recommended for my son to help with his concentration and anxiety. Once I understood more about TRE, and saw the positive changes in my son, I realized that TRE® would be the way to finally help myself and other people on a deeper level. Since doing TRE myself, I have become calm and focused, several health issues have improved. Best of all, my mind has become clearer! I have also been able to assist my husband with relaxing and improving his health since a suffered a heart attack in 2016. Over the past 2 years, I have been involved in helping people of different ages with different issues, from mature women with muscle pain and unresolved childhood trauma to children with concentration and anxiety problems.

My experience with Emmett Technique over the past year has proved to me, that it is a highly effective technique to relieve pain and discomfort in the body. I have personally experienced Physiotherapy and Massage therapy, and am convinced that the Emmett Technique brings faster relief with fewer after effects!

Being able to help people with their stress and trauma is more rewarding than anything I have done in the past!